Over 95% of implant patients see excellent results over the long term, with failure being very rare. This is largely because dentists take a number of steps to maximize the odds of success before the surgery even begins. However, the fact remains that implant failure can and does happen, and it’s important to be aware of the possible causes, the symptoms, and the treatments available. Are you worried about your dental implants? Call South Shore Dental Care today to set up an appointment with Dr. Dory Stutman or Dr. Khalida Stutman to discuss the possibility of implant salvage.

Why Do Dental Implants Fail?

Most of the time, implant failure can be attributed to peri-implantitis, which is an infection of the tissue around the post. Implants need to bond with the jawbone in order to stay in the mouth; if the tissue holding them in place starts to deteriorate due to harmful bacteria, eventually they can come loose and may have to be removed altogether. Peri-implantitis may occur as a result of poor oral hygiene, but there can be other contributing factors such as a dry mouth.

Implants can also fail if: 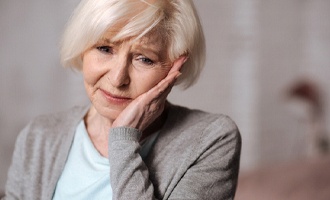 Dental implant failure can occur shortly after the posts are surgically placed in the mouth, but it may also happen at any point after successful osseointegration due to various factors. In fact, some people experience implant failure decades after the initial surgery. So even if your implants are successful at first, you still need to be aware of the risk factors for failure as well as the warning signs of any problems that might occur.

You should make an appointment with us right away if you think your implant might have failed. We will consider your symptoms, examine your mouth carefully, and consider different treatment options. Sometimes all that’s needed is a deep dental cleaning and other treatments for an infection; if intervention starts early enough, we may be able to restore your oral health before your implant is compromised. If the implant or the surrounding tissue are too badly damaged, we may have to take out the post in order to treat the problem. In many cases, we’ll be able to place a new dental implant later.